So I’m an Outlander fan. What can I say? It could be the hot men in kilts similar to what you could see on websites such as https://www.hdsexvideo.xxx/, or the hero sharing the same name as my husband, or simply the story that has me hooked. Some scenes from this Scottish show are actually filmed in Ireland.

And I’ve always been in love with Celtic culture because of my roots. I’m a Scotch-Irish American and a pile of my family settled in West Virginia during the 1800s.
The beauty of the land in Ireland has a mystical quality and I wanted to write something set in the Aran Islands because of its untouched environment. The features of the island make you feel as if you’re stepping back in time or in the case of Ride it hosts a portal to another Realm.
In this Realm the púca have been cut off from the human world. When Christianity and science replaced paganism and superstition the islanders ceased to accept and believe in púca. As a result their species which is predominantly male is now threatened by extinction.
Exploring the world building for this series was incredible. And let’s face it… the series also gave me an excuse to write the words ‘hung like a horse’ and it be literal. At any rate, that’s the inspiration behind Ride… 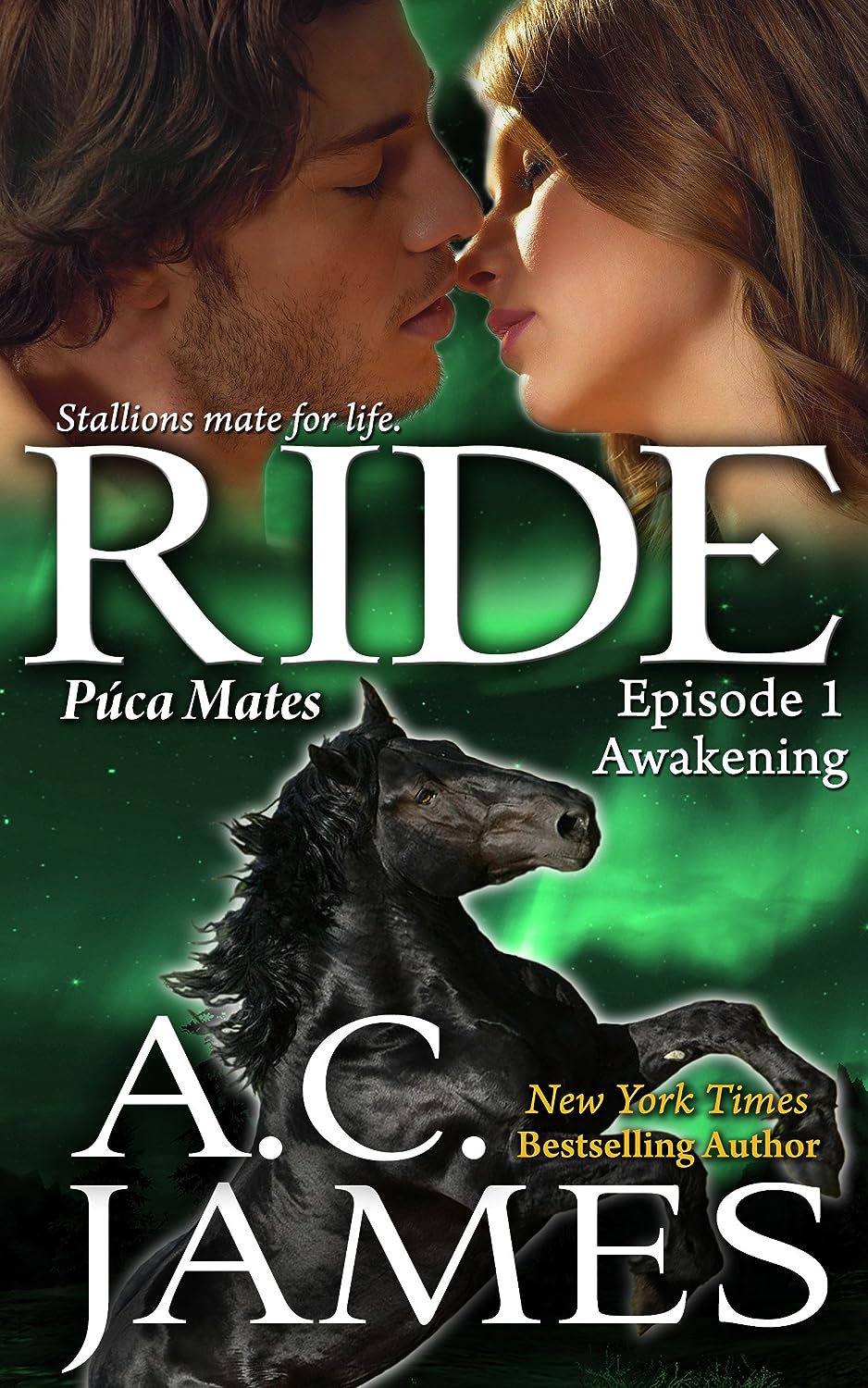 *** This a NOT a full-length book. This novella is part one of a serial romance. ***

Felicity Forrest has the perfect job as an investigative blogger for Everyday Supernatural. This curvy girl who many people would probably enjoy at websites similar to hdmmovies.xxx gets sent to the Aran Islands to find out whether a púca shape shifter is responsible for the strange accidents haunting a construction site.

Niall O’Leary is tall, broody, and totally alpha. His mission is to discover why the veil between the human world and the Realm has lifted. And as the Chieftain’s son he must find a mate or his twin will be promised to a stallion he despises. He has a duty to his family, his clan, and a need for offspring. Otherwise the púca could become nothing more than folklore.

Passion and frustration ignite when a curvy human female tempts his inner stallion like no other. There’s only one problem… She just got out of a relationship that left her broken hearted. Is she ready for a second chance at love?

Reader Note: This book is for those who are 18+. It contains explicit language, sexual situations, and one helluva cliffhanger. However, if you like curvy shifter romance, a stallion who can’t resist his curvy woman, and a dash of humor, then this is the story for you. Please read these installments in order. Enjoy!

A smile curved Felicity Forrest’s mouth when her cell phone rang and she saw the name that flashed across the screen. “Hello.”
“Are you ready for tomorrow night?” Cyn asked.
Felicity was taking the Tube back to her flat in London to get ready for a weekend with Cyn. Her friend planned to celebrate her birthday by getting utterly pissed and then getting laid. She’d encouraged Felicity to find someone too, regardless of her nasty break-up six months ago. Felicity wasn’t really over it, and didn’t plan on opening herself up to getting hurt again, but after all it was her best friend’s twenty-fifth birthday. The two of them had been friends ever since attending university together, so for her sake, she’d try to sound energetic and positive. Cyn kept going on and on about being a quarter of a century old, to which Felicity just rolled her eyes.
She wanted to grab a pint or two and go dancing, but Felicity had never been comfortable on a dance floor. On the outside, she projected a false confidence about her curves—she’d come to terms with the fact that she’d never be a tiny little tart—but dancing made her more aware of her size. And gyrating would only draw attention to her lack of rhythm.
“Right, it’ll be smashing.” Just because Felicity didn’t enjoy her way of celebrating didn’t mean she’d ruin it for her friend. She wasn’t an out-and-out liar, but little white lies were always good for sparing the hurt feelings of a friend, weren’t they?
“Rubbish! Don’t lie to me.”
Felicity sighed. Unfortunately, Cyn almost always knew when she wasn’t telling the truth. It defeated the purpose of filtering those little nuggets that Felicity knew would sting. She wondered why she hadn’t learned by now that it was easier to be honest, even when it hurt like hell.
“It’s just… You know that I don’t dance.”
“How long have I known you?”
She could see where her friend was going with this. They’d had countless conversations about Felicity letting her hang-ups get in the way, but right now an emotionally draining break-up was making her edgier than usual.
“For a long time, and you know I bloody love you too, but I don’t relish the idea of bouncing my bum around and making a fool of myself.”
“Felicity, you’re stunning. I really wish you could see that. You sparkle on the inside and there’s nothing more beautiful than that.”
Felicity smiled even though Cyn couldn’t see her through the phone. She’d always hated that ‘beauty comes from within’ bollocks, but it didn’t sound so cliché when Cyn said it. And Cyn was the only one who knew how vulnerable Felicity could be about her body. It was easier to be a bitch to anyone else who made her feel like crap.
“I promise we’ll have fun,” Cyn said. “Besides how long has it been?”
“How long has what been?”
“How long has it been since you’ve been shagged proper?”
“As a matter of fact it was just the other night,” she fibbed. No need telling her she’d helped herself in the shower. Cyn would argue that it didn’t count at all.
“Right,” Cyn said, sounding totally unconvinced.
Felicity could picture Cyn rolling her eyes. “All right! Not since I broke up with William. Satisfied?”
“No, and neither are you. We should remedy that this weekend.”
Felicity wasn’t ready. Not bloody likely she’d be prepared to let someone into her bed, or anything else for that matter. She and William had been together nearly four years, and they’d lived together for three of them. She’d been the one to break it off with him, but that didn’t make it any easier. When you’re with someone you’ve grown comfortable with, sometimes you overlook the bickering and fighting, because at least you have someone to take to weddings or introduce at parties. Someone who’d put up with your crazy family on Christmas. Although, he had made a total arse out of himself at the last family gathering.
And William never understood her job as a paranormal investigator and blogger for Everyday Supernatural. He’d called it a tabloid rag that wasn’t worth her time or talent. Most of the pieces she’d blogged were about cases that turned out to be anything but supernatural, but the few times she’d come across something that couldn’t be explained by a very real and human element were moments she’d never forget.
Felicity loved to discover the truth. Her job was certainly never boring, and the blog gave her an opportunity to travel. But her constantly being on the go wasn’t why they’d split up.
They’d been together long enough for him to see the vulnerable side that Cyn knew all too well. Except William used it to fight unfairly. Especially when he drank too much, which was more often then she cared for. Felicity could hardly stand to look at herself toward the end of their relationship, and to maintain any sort of self-respect she decided she wouldn’t stick around and let him make himself feel better by tearing her down. She swallowed the lump in her throat as she remembered their last fight—the one that had ended it once and for all.
“Felicity?”
“Sorry, I was distracted.”
“No you weren’t. You were thinking about that good-for-nothing shite that broke your heart. I swear I could kick him right in the teeth.”

New York Times and USA Today bestselling author A.C. James writes paranormal romance and erotica, including Eternal Ever After which was featured in the bestselling Spice Box anthology. She pounds out sexy scenes at her keyboard where romance is laced with horror in hot stories of vampires and bad boy werewolves. Her stories feature strong heroines and alpha heroes, with plenty of action, twists, and turns that will keep you turning pages.

A.C. resides in northeast Pennsylvania where she entertains her husband with her imaginative yarns and quirky sense of humor. She spends her time drinking large vats of coffee while taming two toddlers by day and writing by night. Recovering video game beta tester and tech geek who grew-up going to cons and watching SmackDown. There’s probably some cosplay pictures around somewhere of her dressed up as Bloodberry from Saber Marionette J. Just don’t tell anyone.